The race team was founded in 2007 by Jeroen van Liere. Since the first day we are active in the scooter racing. Maybe you are wondering what scooter racing is? Actually, this is the same as racing with a motorcycle only on a scooter. A road scooter is specially prepared for racing.

The scooter class is traditionally a 2-stroke class where it is usually about tuning, mecanic, speed and adrenaline. Even on a scooter you can kneel the ground through the bend and the kick of racing on a scooter does not bother the regular racing engines. Where a scooter normally reaches 45 km / h, we have increased the power considerably and we can achieve a top speed of approximately 155km / h depending on which circuit is driven.

What we have been doing in the first few years without sponsorships, we are proud that we now have a large number of sponsors behind us who support us!

First of all, let's review the Jeroen race career briefly.

In 2007, Jeroen was given financial opportunity to race at the SOBW organization. This was a dream that came for him.

The SOBW stands for ‘’Stichting Organisatie Brommer- en Scooter Wegraces’’ and has been organizing road races for moped and scooter since 1988. These races have the status of an official Dutch Championship. The SOBW organizes at least 12 races on karting tracks a year distributed throughout the Netherlands. Unfortunately it has been announced that because of the decreasing number of participants, the organization has decided to stop.

Since 2015, I also joined the Malossi Cup in Italy. Here we drive on large circuits and speeds of more than 150 km / h are reached. All the material is the same here because everyone has to drive with the parts of the brand / organizer Malossi. I ride my own scooter so the preparation and adjustments are all done by ourselves.

By 2015 I have only participated in 3 races, but since 2016, I am running the entire championship for the North Malossi class. In 2017 I also participated in a number of competitions at the Vespa class, which was a great experience for me and I achieved a good 7th place in the championship. This class had Vespa’s that were prepared by the organization itself. All Malossi races can be viewed through the Facebook live option and Youtube. These are viewed on average by at least 500 viewers.

Below the overview achieved results over the years: 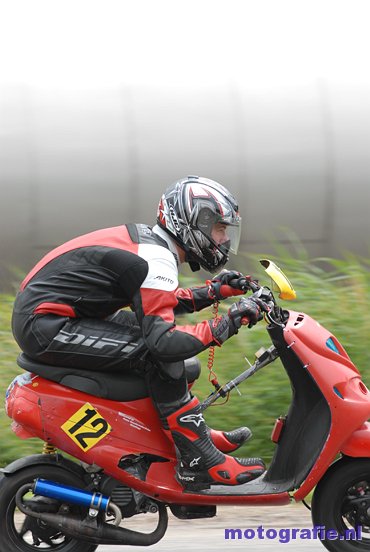 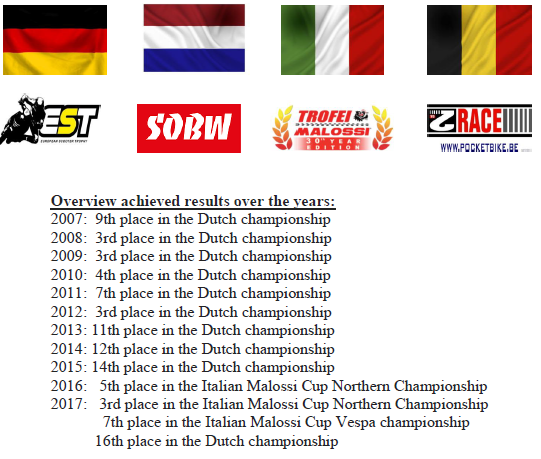